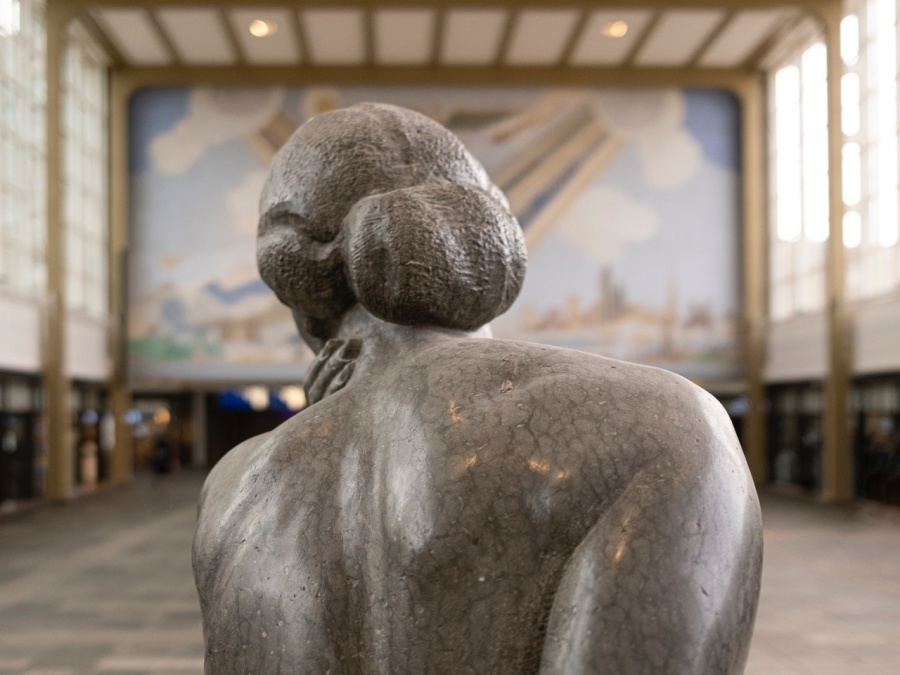 A nude woman rests her chin against her curled knuckles, one leg stretches in front of her. The stone-carved sculpture by Dutch artist Theo van Reijn from 1939 still sits today, overlooking the commuters and travelers that pass through Amterdam’s Amstel Station. She is named Terugblik (Retrospect) and her blank eyes gaze over the sea of faces that only emphasize her own boredom and emptiness for over 80 years.

In 1942, the official photographer of the Dutch National Socialist regime Bart de Kok was sent to document the organization and procedures of state inspectors. Terugblik became the subject of one of his photographs. In it, she stares vacantly into the station above the heads of a crowd of Jewish Amsterdammers who were gathered at the station and would imminently be transported to the labor camp Molengoot, on the German border.  From there, after months of forced labor, they were separated into concentration camps in Poland.

Neither the sculpture nor the photograph in itself present readily identifiable forms of violence, yet, when examined closer they document the lethal indifference of state infrastructure towards specific groups of people. The exhibition contrasts the context of Terugblik today and in 1942 to reveal the continuities from that time that still inhabit public space. In a time when monuments have repeatedly been questioned, Terugblick defines the indifference of the stone witness.

Itamar Gov approaches forgotten micro-histories in order to shed light on vast socio-political landscapes. Gov’s projects start from an inquiring skepticism towards cultural traditions, conventions and gestures that are considered self-evident. His works are based on ongoing research and revolve around the intersection of art and politics, highlighting the strong tension between the known and the supposed, and challenging any assumption of clear borders between facts and falsehoods, reality and imagination. He was a member of the curatorial teams of Documenta 14 (Athens/Kassel), Haus der Kulturen der Welt (Berlin), and the Fondazione Adolfo Pini (Milan). He was awarded a residency grant at the Cité Internationale des Arts (Paris) in 2021, and has recently presented/exhibited his works at the Mardin Biennial (Mardin), Palazzo Butera (Palermo), Zilberman Gallery (Istanbul) and documenta 15 (Kassel).